) Various venomous serpents and aquatic monsters qualify as “taninim” (plural). E.g. Deuteronomy 32:33, Genesis 1:21. One might contend that “Laman” and “tanin” somehow got nested. One might point out verses like, “…the Lamanites … they did fight like dragons …” (Alma 43:43-44); or one might propose that a king Lamoni, like a Pharaoh of old, was symbolically associated with the local crocodile. (Abraham Facsimile No. 1, Fig. 9; see also Ezekiel 32:2) Arguments like this, of course, are a stretch; but this is the kind of reasoning that Mesoamerican setting propagandists might seize upon (should they be so scripturally resourceful) in promoting the notion that a place named “Lamanai” in Belize, legitimizes a Central American setting for the Book of Mormon. But does this kind of reasoning really lead us to the authentic literary locale of the Book of Mormon?

Names (including place names) tend to move with people. The available literature of the time, gave early Mormons the opportunity to discover that there were Native American migrations from the north into and . (“Ancient Ruins”, Times and Seasons, January 1, 1844, Editor John Taylor quotes an article from the Texas Telegraph, October 11, 1843. Before that, there was Ethan Smith, Josiah Priest and other sources available to members of the Church.)

The Mexican historian Vetia tells us of the propensity of some migrating ancient North Americans to name new settlements after ones they had left behind. (Ancient America Rediscovered, compiled by Donald W. and W. David Hemingway, translated by Ronda Cunningham, pg. 50.) So if an occasional Mesoamerican name happens to sound like a Book of Mormon name, what does this really prove? If you find Hebrew sounding names in , it doesn’t prove that the biblical is there.

On the topic of Book of Mormon-ish sounding names found in far-flung places, you might ask how the Lemhi River, valley, pass and Shoshone people of Idaho got the name “Lemhi”. “Lemhi” sounds a lot like the Book of Mormon “Limhi” - don't you agree? Does the name “Lemhi” have something to do with migrating Mormons who settled

There are place names in the region of western and that match names found in the Book of Mormon. Take for instance the American “Indian” name “Oneida”. (Alma 47:5) The authentic literary setting for the Book of Mormon is set in the region of “Cumorah … in a land of many waters, rivers and fountains”. (Mormon 6:4-5) The scriptural land Cumorah, with its drumlin hills, situates in the Finger Lakes region of Joseph Smith’s boyhood state of ; south of that exceedingly “large” body of water we now call . (LDS Doctrine and Covenants 128:20, Ether 15:8-11)

Without crediting or explaining why RLDS members were the first to propose such an idea, a few prominent LDS authors like Thomas Fergusson saw fit to promote the specious “Cumorah” (Milton R. Hunter, Thomas Stuart Fergusson, Ancient America and the Book of Mormon, 4th edition, 1957,  pp. 144, 185, 350, 361-363), even though it was pronounced false by leaders. (See Promised Lands)

Footnotes to the 1879 LDS Edition of the Book of Mormon, that are scripturally based, do not mislead! 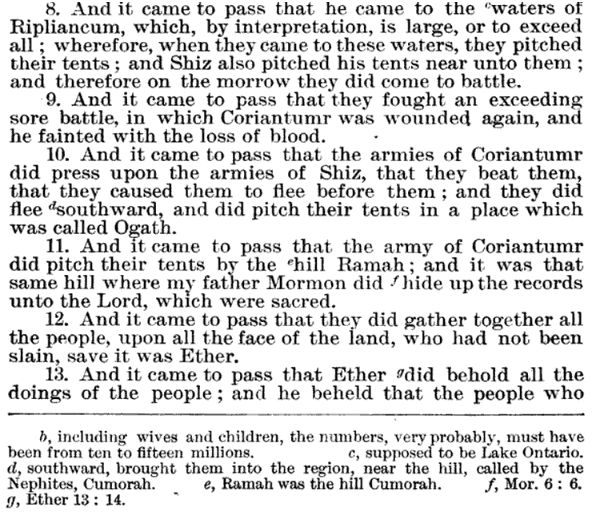 The 1879 LDS Edition of the Book of Mormon correctly identifies as the Book of Mormon “waters of Ripliancum” north of Cumorah. Regarding these “large” waters, Ether 15:8 (pg. 606), footnote c reads: “supposed to be .”  This footnote in the 1879 Edition, is based on the location of scriptural Cumorah. (LDS Doctrine and Covenants 128:20)

The 1879 Edition footnotes d and e, for Ether 15:10-11, correctly state: “d, southward, brought them into the region, near the hill, called by the Nephites, Cumorah.” and “e, Ramah was the hill Cumorah.” In other words, Cumorah situates southward from the waters of Ripliancum (Lake Ontario).

Mormon 6:5 (1981 LDS Edition and earlier), correctly reads, “…gathered in all the remainder of our people unto the land Cumorah.” The 1830 Edition reads, “land Camorah”, and elsewhere, “land of Camorah”.

Mormons tend to forget that Cumorah is more than a hill. Cumorah is a land. It was at the Smith family residence, in the land Cumorah that the young Joseph Smith about “the fulfillment of the prophets – the book to be revealed.” (LDS Doctrine and Covenants 128:20)

But for such facts to become plain to others (ensconced as they may be in geographic traditions that have more to do with Orson Pratt, or John Lloyd Stephens than the Book of Mormon) the warning in LDS Doctrine and Covenants 84:54-59 should be taken to heart:

If you want to know where the true covenant lands of the Book of Mormon are, don’t become “darkened” in mind. Don't give greater weight to works outside of scripture. 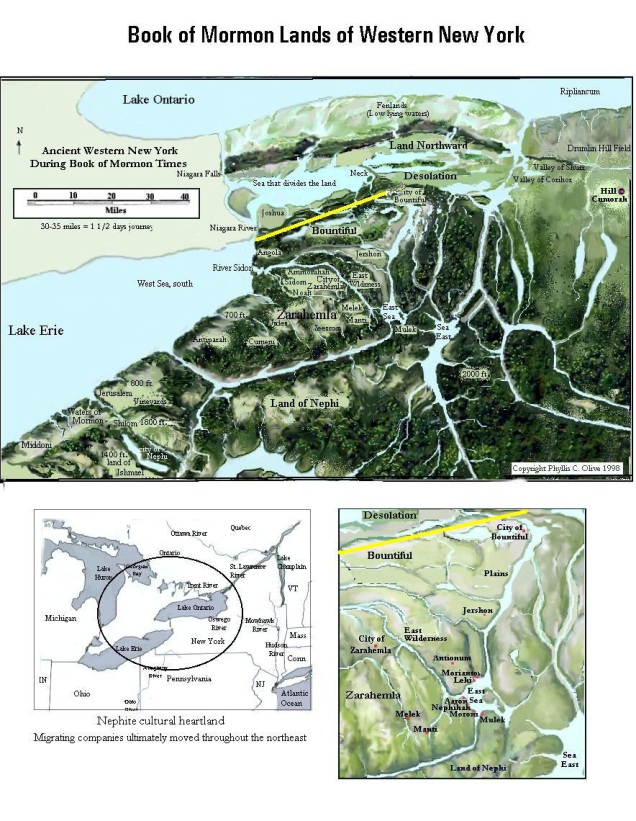